The SBK Dream:
Back in 1992, I saw a kannada movie called ‘Premaloka’ a movie whose songs became the anthem of every single lovebird in the state, but what caught my eye was a massive looking motorcycle used in a song sequence of the movie, my first brush with an SBK.
As a kid in 2nd grade, my definition of an SBK then was a motorcycle plonked with really fat tyres and wrapped up with plastics around the motorcycle.

3 years later I saw an SBK in flesh for the very first time, the way I felt for that motorcycle put my crush (my school teacher) to shame. It was a Honda VFR750 Interceptor.

The best part was that Shankar (the owner of the VFR) also owned a Kinetic Honda sales /service center opposite my school. Shankar uncle was happy to see the glow in the eyes of a 10 year old kid every time the VFR came alive; my time after school was spent admiring the VFR. He used to take me and another friend on an occasional ride on the VFR and used to explain us the parts of a motorcycle, though we could hardly remember any of it.

My R1 Story:
It started with the picture of a new motorcycle in an US-based motorcycle magazine  called the YZF-R1 from Yamaha back in 1998 (when I was in 8th grade) in the Red-white-black color scheme and I was stumped !!!

I wanted  that motorcycle and I knew I would – Someday.

After lot of fighting, my uncle agreed to cut that motorcycle picture from the magazine and I held on to it like a million dollar lottery ticket. Little did I know that the piece of paper would change my life and I am glad it did.

My next task was to find more about the motorcycle –  its power, top speed, price and mileage (quite obvious).Yamaha had caught my attention much prior to the R1, the wheelie RXs and the loud RDs couldn’t just be ignored; The R1 had taken over me.

There wasn’t a single day when I didn’t talk to that piece of paper from the magazine, those were the days when two thoughts were always on my mind : How can I buy it and when can I buy it ?

Limited pocket money from parents and a couple of cash prizes by winning any inter-school competitions duly found their way to the R1 piggy bank, so did any petty cash.

I often wondered “Why was a wall-poster of Sachin Tendulkar available but not of an R1 ? “.

College opened new avenues to earn money; although I made most of it by writing assignments for others at 5 bucks per sheet. Being a science student I used to write assignments for pretty much everything from Commerce  to Arts to Diploma to any other course the college offered.
I had finally saved up to buy my first poster of the R1 🙂 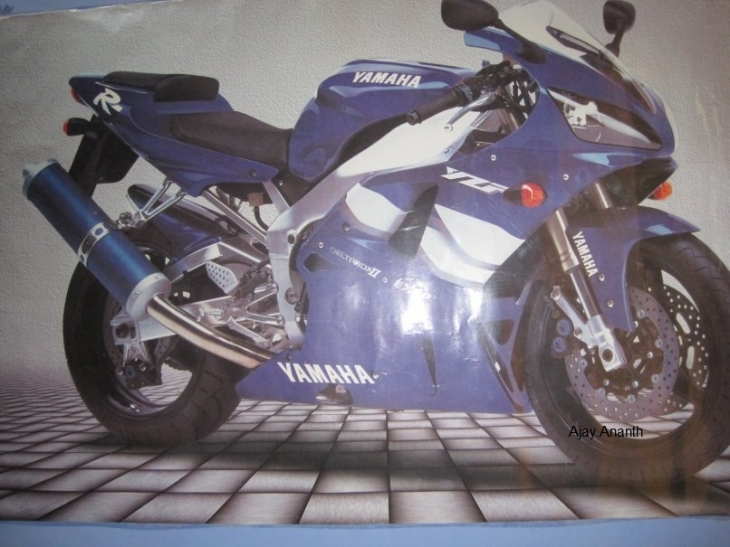 Engineering made things a little better, huge campus with a variety of students offered no dearth for part-time jobs like promotions and event management. But my most cherished one was pizza delivery at Dominos; At 19, I was paid to ride a motorcycle; all it required was a valid DL (Driving License) and 3 hours of time per day.
Additional incentive was the betting among the delivery boys on making the fastest delivery to a particular address – some of my most insane riding days – NO Rules,only speed (Now I regret pissing off and endangering myself, pedestrians and other motorists).

In my 2nd year of engineering, dad got me a 2005 Pulsar 180 (which I still own and love) and I was given a fuel allowance of 800 bucks a month, Boy did I see an opportunity there; I used to take the bike from my place park it at my friend’s place on the adjacent road and then travel by bus; 800 bucks was big money for me then.

So obsessed was I about the R1 that my friends called me ‘Rong 1’ (Read as ‘Wrong 1’), in fact a few of them were genuinely concerned about my enthusiasm for the R1.

By the end of my engineering, I had graduated from the 2003 R1 poster to a 1:12 Scale model of the 2006 R1.
In fact so excited was I to hold the scale model that I went the next day and picked up 2 different colors of the R1 the next day, making it to 3 – Red, Black and Blue color each. 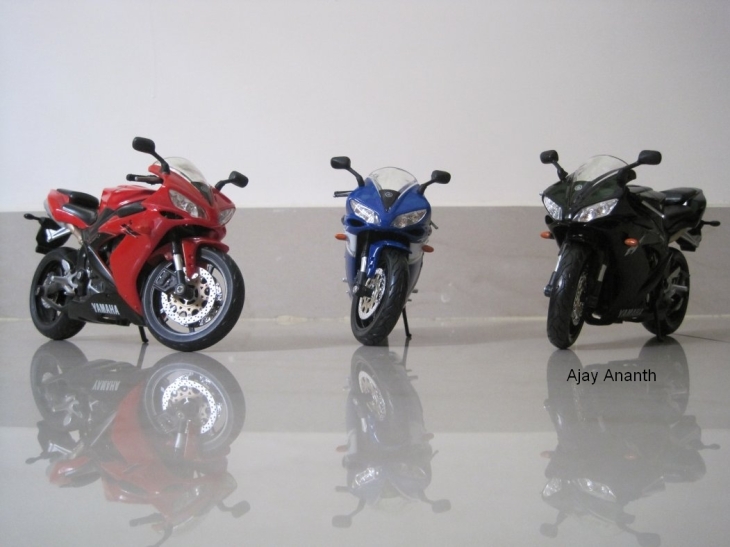 What’s left was to pick the life-size replica…

By the end of engineering, before my first job as a software programmer I had saved at least 1/4th the money value of the R1.

During my software stint, the saving mode hit the power band; 2.4 years of slogging ensured that the remaining amount to buy the motorcycle was in my bank account. I always knew that a software job was a just a means an end aka the R1,  since I was never satisfied.

I knew that this madness would end the day I have the money to buy the R1 and so it did.

After a pursuit of about 11 years, on Jan 3rd 2010, The Dream transcended to a reality; from a paper-cutting to a wall poster to a scale model and finally onto the real bike – The R1 was realized 🙂

It was worth every penny I had saved, worth every moment I yearned for it. The after-effect was the balance of 400 INR in my account 😛

I have always believed that your first Super-bike should be something you lust for and should go all out for it;  practicality can wait for Round 2. 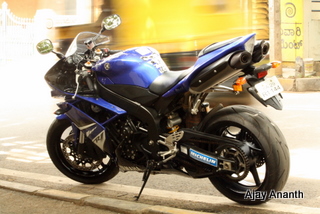 But the moment I saw my name written as the owner in the RC book can’t be put in words; it’s better than the taste of Dark Chocolate from Godiva, better than the rush at 200kmph heck better that the first kiss.

PS: I no longer have that paper-cutting from which this dream started, but I can never forget that piece of paper which was everything to me then, from which initiated The Dream & The Urge-  A Pursuit or Madness (as many thought) materialized into a 2008 YZF-R1 – after 11 years and 48 days.

And the love story continues…

This site uses Akismet to reduce spam. Learn how your comment data is processed.